What is a Unit User?

Unit-level API's handling Cell creation and deletion are the same as other API's in the sense that they identifies the accessing entity by using OAuth 2.0 Bearer tokens.

In other words, accessing entity can be authenticated and identified by sending a retrieved token using HTTP Authorization header as follows,

On the other hand, the access control model for the Unit-level API's and operating Unit Users are totally different from the one for users authentiated at a normal Cell accessing to the Cell itself or visiting other Cells.

The only following two kinds of tokens are recognized in the Unit-level API's;

When using these tokens, Cell-level or Box-level ACL is not taken into consideration at all. Also, cross-Unit access is not allowed unlike Cell-level API access using Trans-Cell Tokens.

UUT is a Bearer token of OAuth 2 based on the SAML Assertion with the following information.

Also, the transcell token issued by giving the root URL of the unit to p_target in the Account authentication in the cell satisfies the requirements of the UUT, By including the URL of a specific cell in the setting of the unit, the cell can be a UUT issuer.

An example
When issuing a UUT in a cell
Set io.personium.core.unitUser.issuers={UnitURL}/{Cell}/ in personium-unit-config.properties

UUT usually does not have access authority other than CRUD of Cell. When you want to manipulate the contents of Cell, it is necessary to give unit user role (CellContentsReader, CellContentsAdmin) to be described later.

UUT plays a big role when providing Personium as a service, but Personium can operate with only UMT without using UUT.
The biggest motivation for service providers to use UUT is to manage billing destinations of cells at once.
That is, by having the service provider issue a different UUT to each customer himself and using this to access the cell CRUD API, the following is realized.

On the other hand, if an individual or organization has its own dedicated unit, all the cells created in that unit will be managed by himself, so the above function is unnecessary.
In that case, you can use UMT instead of UUT for operation. 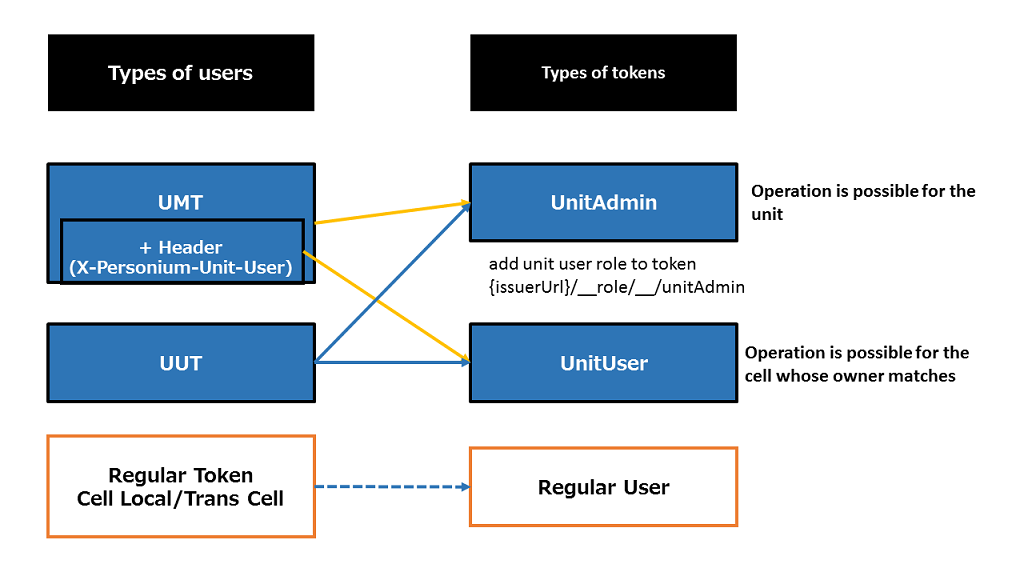 Type of a Unit User

Users who can operate units

The owner can not change after setting it at cell creation.

If the CellContentsReader role has been granted, the Unit User Token for that user has read permission on the contents of Cell.