To explain cell-centric authorization, assume a situation in which personal data is accessed. The following figure shows a comparison of data access before and after PDS.

The following roles appear when accessing data with PDS.

As shown in the figure above, the data accessor normally accesses the PDS through the application, and the access is controlled by the authorization server in the PDS.

Therefore, in Personium, the data subject is expressed in units of cells, each cell has an independent URL, and has an authorization mechanism. Specifically, each cell holds two endpoints (Authz and Token) of OAuth2, which is the authorization framework. The following table shows examples of specific URLs for each data subject.

When accessing data, authorization is performed using these endpoints and it is controlled so that only appropriate data accessors can access.

When thinking about data access, first consider the case of simply accessing the cell directly without going through the application.

When Alice, the data subject, accesses her own data in the cell, she does it in the following order. 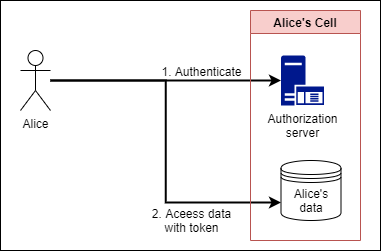 When performing authentication at the token endpoint, use the Account (for example, me) that represents the data subject created in advance and the password. [1] Also, at this time, the data is accessed by the Role linked to the preset Account.

Roles are used for data access control and are described in detail in the RBAC section.

Next, consider data access to another cell where Alice accesses Bob's data. Please perform the following in advance: 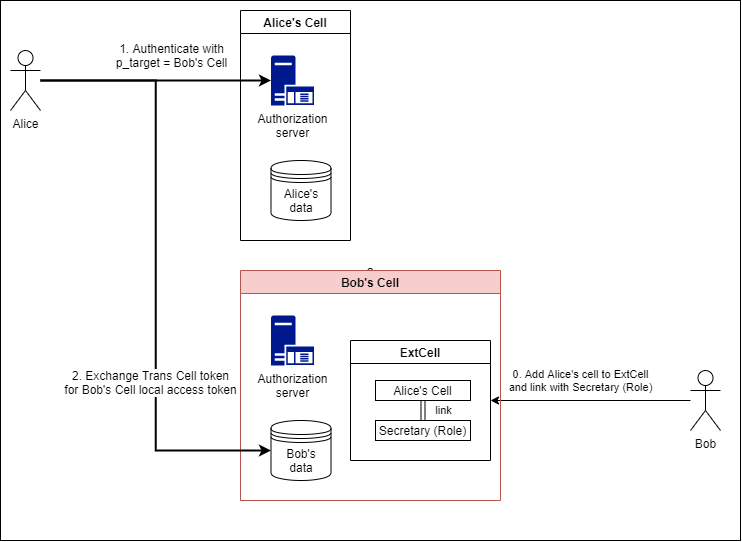 The access scope of the transcell token obtained by this method is within Bob's cell.

Other cell's data can also be accessed by the token exchange method.

The transcell token described above is verified according to SAML2 Assertion, so the token is long. Therefore, performance tends to deteriorate due to client-server communication and server-side verification processing. Performance can be improved by exchanging a shorter tokens.

The token exchange method has similar procedure for obtaining transcell tokens, only with an additional step.

Please perform the following in advance.

Token exchange will be performed in the following order. 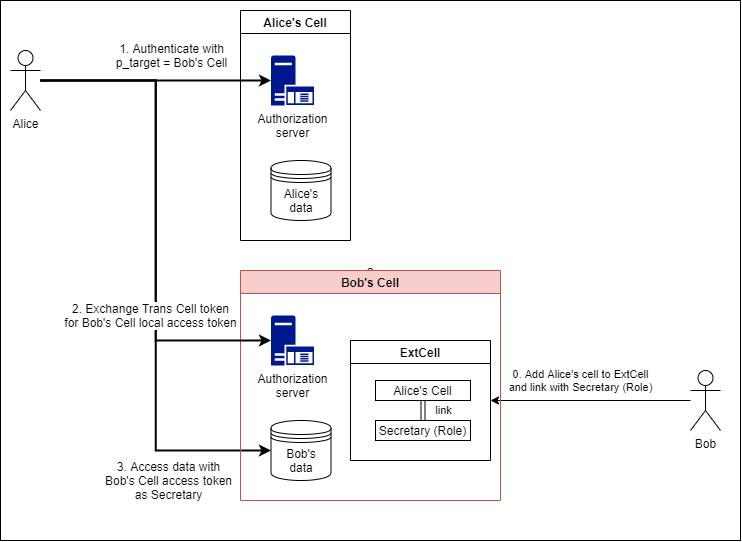 When you get the access token or transcell token, a refresh token is issued for renewing the token's expiration date.

To renew the access token using the refresh token, perform the following procedures. 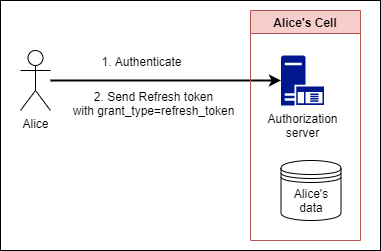 So far, the data access method described assumes that an existing cell with data and an account to access the cell are available. However, no cell exist immediately after building the Personium unit. It is necessary to create it. In addition, an operator who is not the data subject must operate on the cell.

Unit master token and unit user token are prepared as administrative tokens for performing the above operations.

Many tokens have been introduced to access data and they are summarized in the table below.

In the previous section, it was stated that Role is determined by Account in the authenticated cell and the relationship between cells. Personium has a mechanism of RBAC (Role Based Access Control) that controls how much data access is allowed by this Role.

A user controls access by setting which Role can perform what operation (ACL) for each resource. 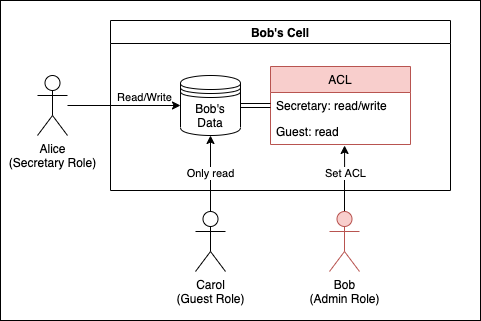 Also, in order to utilize the data on PDS, it is necessary to have abundant applications.

Appropriate delegation of authority is required to allow apps that take various forms of provision to access data securely. Personium uses OAuth, which is a framework for app authorization and delegation, to achieve these.

As described above, Personium has the function of the authorization server in each cell. If you apply to OAuth characters in this case, it will be as shown in the following figure. 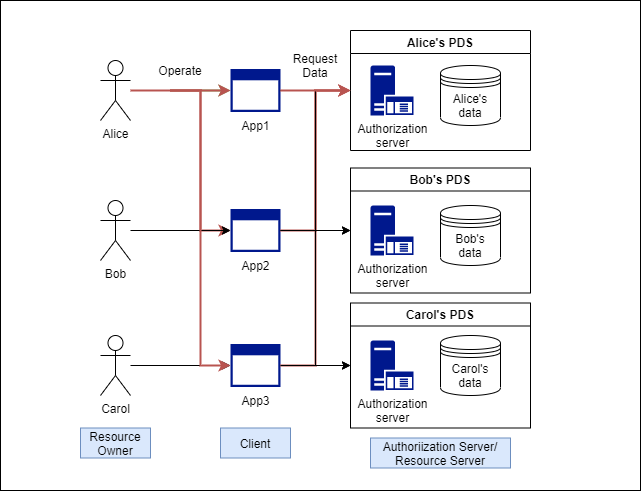 The specific authorization flow differs depending on the grant_type, and Personium supports the following grant_type.

grant_type is selected according to the form of the application (whether it is a trusted application, server side web application or native application, etc.). We recommend the following as selection criteria:

Next, the ROPC and authorization code flow will be explained.

This is a simple flow of providing username/password to the application and receiving an access token. 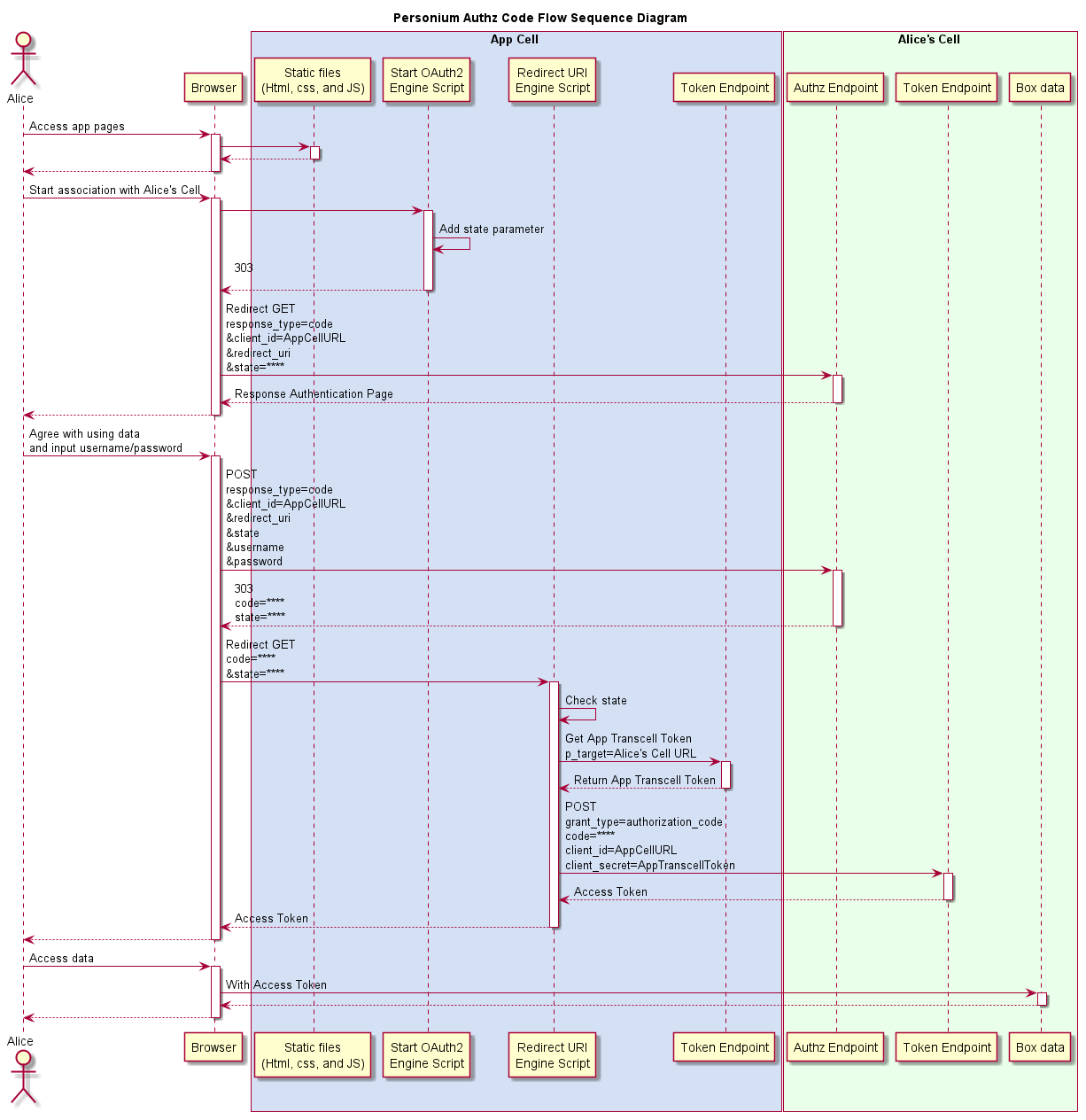 Details are described in the section App authentication.